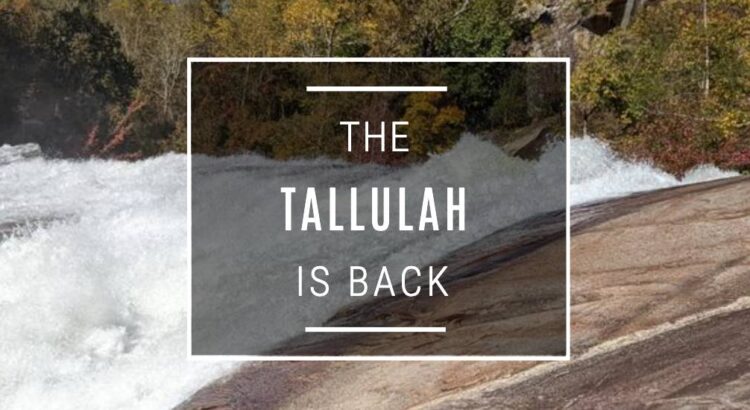 I believe it has been two years since anyone could legally kayak Tallulah Gorge in Georgia. This past weekend she was running and it certainly felt good to be back. I was rusty, starting the first rapid creating a brand new line for myself, one I wouldn’t recommend but worked it out, then rolled into Oceana that created a flip into a roll that I was breathing a sigh of relief.

There were some changes out there. Right after Bridal Veil you would typically go left of a huge rock (and then go around the backside of it into a huge eddie) and cut back to the left to hit Zoom Flume, oftentimes going backward on purpose. There is a large tree across that boulder so if you want to go left to hit Zoom Flume, you need to get out of the boat. Otherwise, the right is open that you can eddie hop down. It went much better on the Sunday release (higher water).

I’m not sure I would consider it the entrance, but after Tat leading into Tom’s Brain Buster, there has been a rock/landslide on river left and that has added new rocks. You used to head toward river right to enter the right line of Tom’s. Now you are almost center/ center-left and head toward the right and then the rest is pretty much the same. Again, the right line goes much better on the Sunday release.

For those that were out there on Sunday, here is a link to some videos I took on my phone of Oceana; https://photos.app.goo.gl/fiVDa5U5NzonC3GN8

This gorge is truly stunning with some great whitewater. We get two more releases so enjoy everyone!