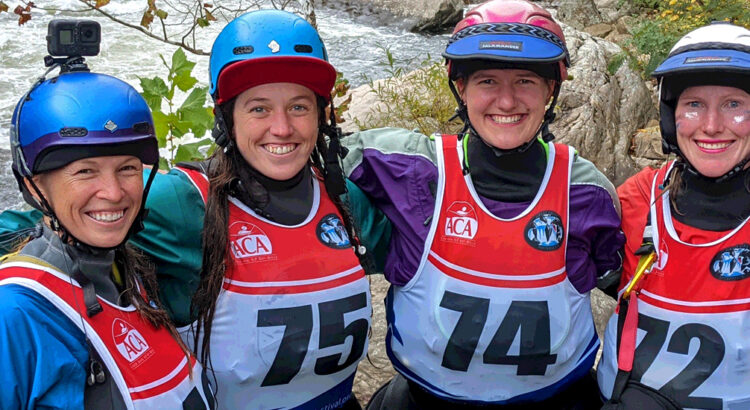 Let’s just get this out of the way. I have never considered myself a racer. I have competed in the freestyle world. I have competed in the kayak portion of the Captain Thurmond Race (on the New River in WV) and I did a couple of mass start races in Idaho many moons ago. I am not entirely sure why I don’t really race, but I don’t.

Last year when Paddle In Pink ran the Lady of the Fork racing clinic, it planted a seed for me. I knew the following year the race would be held on what I would consider my birthday weekend and it would be ringing in the next decade for me. In the back of my head, I thought racing the Russell Fork would be a pretty rad way to celebrate.

It was at some point in September that I figured if I was going to attempt to think about racing, I needed to get in the long boat. I did just this on the Chattooga (a river I am very comfortable on) and progressed my way to a timed fast lap and I felt pretty good about it. I then took my JK Unlimited and my medium JK Antix to the first Russell Fork release weekend of the season to see if I indeed wanted to race.

Let’s pause. At this point, I did not know the lines really at all. This river is not close to me and I have barely been on it in my career. My head game was this: I’ll figure it out. And I did just that. I jumped out, I scouted, and ran the lines I thought. Thing is, there are many lines to a number of these rapids. Therefore I watched my GoPro footage to see if I wanted to change anything. And then I watched Dane’s race footage a number of times. Funny how Dane makes everything look so easy and then you attempt the same thing and quickly realize why he is Dane Jackson!

I didn’t really feel amazing long boating Russell Fork. I had far more fun in my Antix. And then the head games started. I went back and forth a fair amount leaving that weekend wondering if I would return for the race weekend to actually race. At that point, I did not get back in my long boat.

I had booked camping for the race weekend so I was going regardless. My thought was that I didn’t know the lines at race water levels (it runs 800 cfs on every weekend except the race, race weekend it runs at 1000 cfs) and I was only pushing myself to race because it was my birthday weekend. I didn’t figure this was the right reason to race and therefore I said I was just going to out there and experience the water level to decide for the NEXT year. I had also tweaked my neck picking up a kayak and was struggling through a pulled neck muscle. They weren’t kidding when they said you would just randomly fall apart getting older!

The weekend before the race I got into a conversation through text with another JK team member and it was a game changer. I was told that 1000 cfs would be flowing Friday, Saturday, and Sunday (which I hadn’t realized prior to this conversation). That meant taking off work, getting in practice laps on Friday, and deciding from there. Talk about being dramatic, right?!?

I lucked out because I reached out to Chris Hipgrave to see if he would be out there on Friday and willing to let me tag along. He graciously said yes. That first lap I felt sloppy and I could tell I hadn’t been in the long boat in nearly a month. I learned some new lines and trusted the advice given to me by Chris. On the second lap I wanted to clean things up and by the end of the lap I felt I did just that. Upon getting out of my boat at the takeout, Laura Eddlemon asked, “So, are you going to race?” I smiled and said “Yes.”

Now I was nervous. To be clear, I have been a nervous competitor my entire life.

The next morning I went to the takeout, I registered, picked up a bib, and when most went to the put-in to get in a practice lap (race doesn’t start till 3 pm), I went back to the campsite. I decided to take a shower, eat lunch and watch some more race footage that is on YouTube. I didn’t watch much because it was just making me more nervous. I knew the lines, I just needed to calm the head game.

The timing worked out and I was able to paddle in with my homegirls and that certainly helped lighten the mood for me. When I reached the beach (the starting point) I recognized a couple of the other female racers and we all started to chat. Morgan Cox had some music playing and we were all talking about our nerves and the lines. With each new racer approaching the beach, the conversation grew. This was important because it distracted me.

Calhoun would go first, then Hipgrave. They were the timers at the end. Then I would go and start the female heat. My plan was not to push it in the beginning because I did not want to be gassed for the final rapid. When I took off I had to remind myself that I was just kayaking and remember to smile. With each rapid, I would slow myself and focus on the line. I never pushed myself in the flats until the last flat section. I’ll be honest, I didn’t really know how to pace myself and when I got to that last flat section I knew I wasn’t gassed. The last rapid has many different lines and I did end up in a slot that was new to me but I don’t think it really slowed me down too much and I felt that I finished pretty well. I didn’t swim, I didn’t flip and I didn’t get eddied out.

Since I was the first female to go, this meant I got to watch the entire race. I jumped out and started to film on my phone and once the women had all finished, I crawled up the river right bank and hung out with a number of other racers and spectators. My energy was high, the people hanging out on this rock all had great vibes and it was just a really fun finish.

The take-home message for me: this race was an absolute blast. I was far more nervous than I needed to be, I finished middle of the pack, took first in the Master’s division, and made lifetime memories. Unless I am injured, I will definitely race next year and hopefully, my main female crew that I paddle with will join in and we will make a mini-competition among ourselves. After all, that is what this is race is all about, having fun!