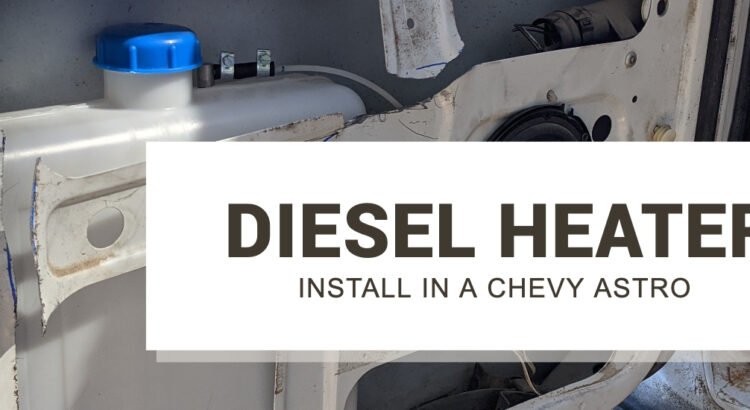 I recently installed a Chinese diesel heater and have done a ton of research to feel confident in actually installing this. Here is a list of everything I bought ($265 in total spent):

Let me be clear, figuring out where to actually install the heater and the tank took far longer than the actual install. The reason being is that you need to figure out what is underneath the van and how you are going to run your wires from the heater to the battery as well as how is the heat pushed out to the living space. This was no easy task for me. I actually drew out all my options on paper since I am such a visual person. I really wanted to put the heater under the passenger seat which had enough room but underneath was the heat shield to the van’s exhaust system and I wasn’t about to mess with that. I then narrowed it down to two locations: under the bed or right behind the driver’s seat. I decided to go under the bed simply because this was the cleanest space underneath the van. With an Astro, there isn’t much underneath that is open. Many people seem to install these where the factory jack goes but considering I couldn’t use this space, this was not an option for me.

I started by drilling one hole in the van floor where the heater would go and then I got underneath and measured everything to make sure I was good to move forward. I decided to put my heater plate on top of Hardie Backerboard as an extra layer of heat resistance (I had extra so it was easy to add). That is on top of the floor plywood.

After I had the plate installed I realized I needed to take it off as the fuel pump cord needed to run up through this. I hadn’t seen that tip anywhere so take note if you are doing this install yourself.

I then routed everything underneath and moved onto the diesel fuel tank. It fits in the back door with some cutting. The standpoint pipe that was included in this kit along with the regular nozzle is complete crap. The washers are completed rusted! So I ordered a new standpoint pipe off amazon and I installed that on another day (details on this later because it is nearly an impossible job). In the meantime, I routed the fuel line in the door, which took a while and I had to get creative. I pushed it through the hole that already exists for the rear speaker and then I was barely able to see it. At first, when I kept pushing it, it went behind and back up the rear AC unit. So I started over. When I could see the fuel line sticking out, I went and cut some scrap electrical wire and took the copper wire out, and made a small hook at the end. I could then use that to hook to the line to bring it up. Once I was able to do that, I then flipped the copper wire around, taped the fuel line to the copper wire, and fished it down. Bingo.

I used the copper wire again to guide the rest of the line through the port that will lead to where the tank sits.

Now that the line was fished through the door, I did some measuring on where to drill the hole through the floor but really it was complete guesswork. I drilled a hole from underneath up and it came out exactly where I wanted. I added a rubber grommet and easily slid the fuel line down.

Below you can see I cut in basically two locations in order to get the tank inside and it is pretty much self-secured. I ordered a flexible funnel and that is how I plan to fill the tank without making a mess and then I will just hang the funnel under the van. I’ve only filled it up once but it worked well. I would add to make sure you get a funnel that has a handle. I do plan on adding a panel with an access door to make this a bit better looking! I’ll update with photos when I am done with that.

I started to run the electrical but the power (+) was too short so I needed to buy more wire to connect and power this puppy up. The negative I secured to the heat plate since it is a short line. After doing some research, I decided to order 10 gauge wire and probably bought much better than I needed but I knew this was a longer run of wire and didn’t want to drop voltage. I also read to cut the stock wire as close as possible to the heater and have as much of the bigger gauge wire as possible. Once this wire came in I just used a butt connector to add the new wire to the stock wire and then I ran that up and over to my battery (it is in the back on the opposite side of the heater)

I bought a standpipe and added that to the top. This was almost an impossible task. I actually messed up and drilled the hole too close to the opening as I didn’t take into account the width of the nozzle on the standpipe as you have to twist it. So I drilled as far away as I could while still cramming my hand in to be able to hold the nut on the inside of the tank and then twist the standpipe so the nut would screw onto the backside of that standpipe. The image below shows the hole that is empty (my mistake) and then the standpipe hooked up. The reason why I added a standpipe is because I didn’t like the idea of the fuel line being at the bottom. Seems like a mess waiting to happen.

I hooked up the fuel line to the filter and the pump and I ordered a “silencer” silicone case for the pump and I did have to trim the openings a bit (sorry no photo). I think it was a waste of money in terms of making it quieter but I left it on thinking it will help protect it from any kick up from the road.

My exhaust points back toward the tire and the intake is facing up and down to avoid getting any exhaust fumes. I know they say to route everything to the back but I didn’t want my intake to suck up the exhaust fumes.

Now for the remote/LCD monitor. This is where I stumbled for a while and reached out to the facebook group.

When I plugged it up, this is what my LCD screen looks like: Notice the color of the text – most youtube videos show a different LCD with all red fonts. This is not that same LCD.

The big red negative symbol scared me but it shouldn’t have. That just indicates this is off. Everything I read and saw online spoke about hitting the gear button to set the time and mine does not function like that. I thought it was broken. Also, anything I read about priming it, did not work. I have since seen a video showing the up and down arrow being pressed at the same time and as soon as you let go, it stops priming. Didn’t try this but worth a shot.

Since I couldn’t seem to prime it, I just powered it up and let it run. Then I got an error:

So at this point, I gave up. At least for the time being. I went back to the facebook group and they told me to fill the line with fuel manually. I did add some and some was already in it from the prior attempt to get it going.

I powered it on and let it run. It eventually gave me the same error. Now though fuel was to the pump and coming out the other side so I just tried again. I was then successful.

I have since learned that pretty much all the directions and youtube videos show an LCD screen that the letters/numbers are all in red. Pay attention to the color of your text. I had mine set on degrees but it wouldn’t stop running. According to the Facebook group, folks have more success running in hertz as it will not run as often. I don’t have hetz on mine but you can put it in manual mode and run it on the lowest settings. I have also seen you can put this in “altitude” mode and it will draw less fuel. I haven’t done this but you press the settings and OK button at the same time and then a mountain icon should appear. I also have not figured out if there is an advanced setting mode like other LCD screens that require a passcode to fine tune the unit to your power heater (2k, 5k, etc.).

If anyone knows more about these buttons on this particular LCD please chime in as it could help many of us.

I found this video more useful than any others;

The only thing I want to do is add the fuel nozzle that originally came with the unit, install that in the hole I originally drilled OR in the cap, add a line to it that goes outside the van so it is vented outside. Makes sense to use the cap since that is already vented and that is inside the van. I did plug the original hole I drilled and it doesn’t seem to be seeping fuel out at this point.