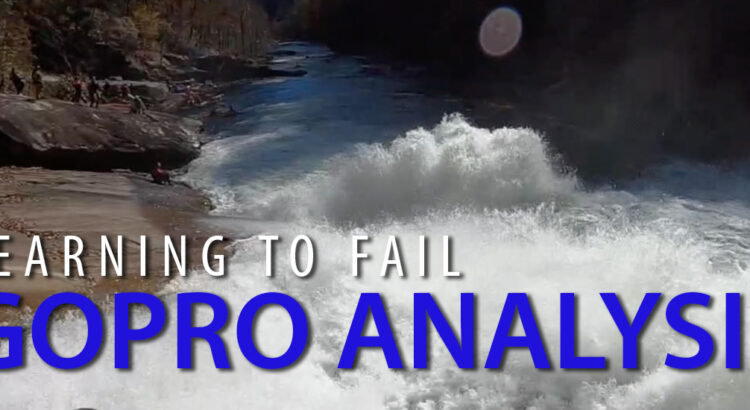 I’ve been running the Tallulah Gorge for a while now and have always thought the famous rapid Oceana was not that much about skill and more like rolling the dice. After today I was puzzled because I swam the rapid and I was not entirely sure why. Did I roll the dice wrong?

I had just received a new GoPro as my previous 8 was replaced (thanks GoPro!). I get people wear an action cam for various reasons but the main reason I use one is to learn from it. This is also the only time I really want to watch other paddler’s GoPro footage. So upon getting home, the first thing I did was watch my footage of my swim. I thought “Really, I had a pretty good line and even took a stroke through the hole.”

So I watched some more. And more. And more. I watched on my computer where I could watch frame-by-frame. Even after this, I was dumbfounded at what went wrong. I also learned that I attempted to roll more than I originally thought. Pretty amazing how wrong our memory really can be.

So I watched it again. I noticed I had a pretty good bounce off the 2nd roostertail. Still, I thought I reacted well to it. So I watched it again. That stroke that I thought I had placed, was just a bit early. And this is what I love about wearing a GoPro. My timing was slightly off and I happened to be pulled back into the seam (from what I am told from an onlooker).

I can’t say I can go out there tomorrow and do it any better. After all, it is one big whiteout that you just hope your muscle memory kicks in and you are taking strokes when you need to. This brings me back to my original point: how many people have you seen run Oceana, not take a single stroke (in fact their paddle is completely out of the water and across their chest) and they skip through just fine? How many skilled boaters have you seen come through and still end up in the corner pocket?

My opinion still stands this rapid is far more about guts over skill. Am I wrong?

Regardless, this is one fun river and even after a swim, you can still have good lines out there if you keep your head game together.