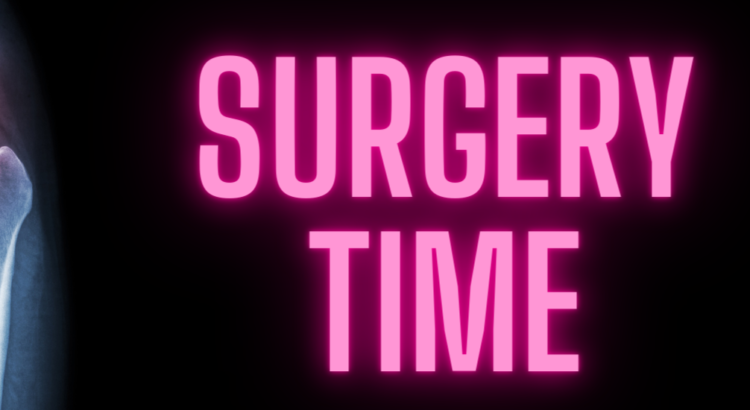 Let me give a rundown of the prep going into this surgery (hip impingement + labrum tear) and my experience with actual surgery. Prepping for surgery is something I hadn’t really thought about so let me discuss some aspects. Post-care is usually considered but seeing that I live alone, meant packing up a fair amount of stuff to live in someone else’s space.

I also had to consider how accessible my place would be when I returned. This took more time to prep. I certainly didn’t want to come back to a dirty place and the big thing for me was/is my murphy bed. It is heavy so I tried installing gas pistons on it and that was a fail. Therefore the bed is staying down for a while!

Day of surgery was just getting up early and wearing comfy clothes right down to just wearing slides because I figured wearing regular shoes wouldn’t be easy. This is a tip I’d give if you are doing the same surgery.

Basically, once at the hospital, they get some general info from you and then they come to get you and they get after it. They asked me a ton of medical questions, I had to take a pregnancy test, strip down and get in the gown. I chatted with the nurses for a while before the anesthesiologist came in, spoke to me for a bit, started the medicine, and was wheeled into the operating room. I put myself on the operating table and I do remember looking around at everything and the massive lights in the room. And then it was lights out.

I woke up in recovery where I had a fantastic nurse that was primarily concerned with my pain level. My pain level was not dropping and I stayed in recovery for about 2 hours. She just kept injecting me with meds. They told me my surgery lasted an hour and 20 minutes.

I was then wheeled out to the car and I was insanely dizzy. We found a place nearby to stop and eat as I said I needed to just stop and sit because I was so dizzy. I ate hardly anything. I had approximately a 3.5-hour ride home and it was not fun. I threw up a number of times and just felt awful. My throat also killed me and it was hard to talk just because of the throat pain. I am told this is because of the endotracheal tube they put in for the anesthesia.

I was excited to get to where my post-care was going to be to just sit and be out of a moving vehicle. I also really wanted to see my dog. Being that he is roughly 120 lbs and loves to throw his weight into you when you see him, I was very cautious about greeting him. In fact, I had a walker waiting for me and this was pretty good protection.

That night: They insisted I try taking the percocet (pain pill) so I made sure to eat and took the nausea medicine before taking a half dose of the percocet. I waited an hour to see if I would have a reaction and then took the other half. I went to bed and slept through the night and got a solid 7 hours of sleep.

The next morning: Got up, ate, and took all my meds. Maybe an hour later, the itching started. It wasn’t horrible so I didn’t think much of it. Then my leg really started to swell. It swelled so much that I couldn’t see my kneecap, my calve was swollen, my ankle was swollen and even my toes were swollen. I felt like the Nutty Professor! And then the nausea started. This is never a fun process.

This concerned me so I made a call to the clinic. Within an hour or two, the doctor called me to find out what was going on and was good about answering my questions about what he found once he opened me up. He suggested if I could tolerate the pain, just get off the pain meds. He said all narcotics have side effects of vomiting and/or itching. He also asked me to take photos of the swelling and send them to him.

What was actually wrong with my hip:

He said with the amount of damage to the hip he was fairly confident that I would see significant improvement from the surgery. That is certainly promising news.

I am using a walker in the house and crutches outside of the house. I asked for a handicap tag for when I am off on my own and they sent over paperwork that you take to the DMV to accomplish that task. I also asked if I needed to be cleared by the doctor in order to drive for car insurance purposes. They told me I did not need to be cleared, I just couldn’t be on narcotics.

Here is a pretty good article if you want to read up on what some causes are for this, etc.