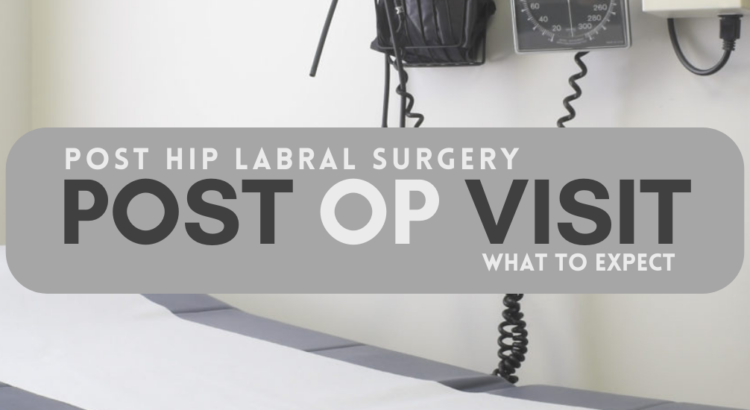 Here is a quick note regarding what you might expect from your first appointment since your hip labral tear surgery.

Pretty easy and pretty standard. I almost always have a list of questions to ask the doctor and write these down before going in and literally bust the list out during the appointment to ask everything that I need to ask.

Here were my questions:

My Doctor. Would I recommend him?

I can fairly confidently recommend the doctor that did this surgery, Dr. Dumont out of Lexington Orthopedics in Columbia, SC. There was one pretty big thing that bothered me regarding surgery, which basically was a medicine that is on my allergy list (and a true allergy, I broke out in what looked like poison ivy) that was going to be given to me during surgery. I had made sure to ask, thankfully. When I asked why it was going to be given to me when it was clearly on my allergy list, the nurse said she did not know. When Dr. Dumont was asked before the surgery what to give me instead, it was almost like he didn’t believe that I had reacted to this antibiotic.

Aside from that, and them being very persistent I give a pain med a go even though that was also on my allergy list, I really like Dr. Dumont. Many doctors I think just don’t have great patient social skills and come across as awkward. This is not the case with Dr. Dumont. Also, I didn’t feel rushed. The fact that he had personally called me after surgery when I was concerned post-surgery is great. He also drew things up for me or pointed them out on posters. I am such a visual learner and I very much like to know the why behind things. The nursing staff was incredible and I can’t rave about them enough.

The fact that I am a solid 3 hours away from the doctor does make things far less convenient but I could really care less. I want the best when it comes to surgery like this. So, if you are within what is a comfortable distance for you from Columbia, SC, I would recommend Dr. Dumont.