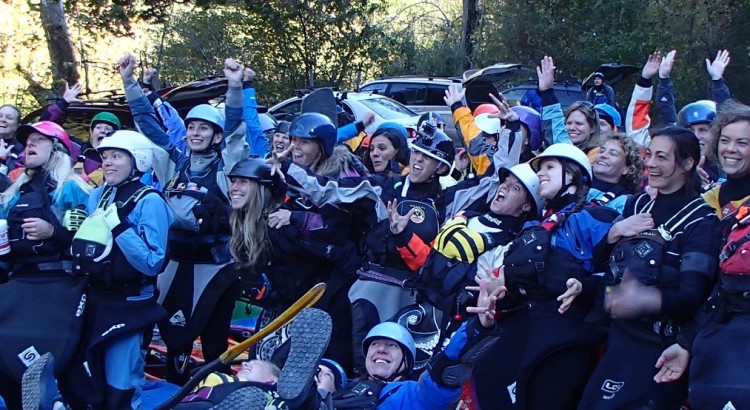 On Sunday, October 19th, Laura Farrell organized a Women in Charge – Green River Take Over event. Usually, I am all for all-girl paddling events, but I almost did not go to this one. I feared that organizing a massive group to paddle the Green River on a Sunday two weeks before the Green Race was not the best plan. I pictured pissed off racers and participants getting speared by long boats in crowded rapids.

Despite my misgivings, the event was terrific. To start the day right, male shuttle bunnies, complete with long ears and cotton tails, whisked us to the Upper Green Put-In.

There was the obligatory group picture and then groups of around ten gals put on at time. The going was a bit slow on the Upper due to some scouting. There were many cheers of encouragement and accomplishment as each group went through the marquee rapids. At the Narrows put-in some of the girls hiked out and Laura Farrell gave an excellent safety brief.  I have to admit, this is where my character flaws came out.  I was itching to get moving!  I was egging my group to skip the meeting and start on the Narrows even though I was not even the group leader. My only excuse is that I love boating so much that I just want to go, go, go!

The trip down the Narrow was worth the wait. The racers seemed nonplussed by the horde of women and the group flowed through the Narrows without a hitch. Some of the excellent boaters such as Katie Dean, Adriane Levknecht, Andrea Davis, and Emily Shanblatt fired up the big three. It was inspirational to see how flawlessly they boated these tough rapids.

The rest of us had a great time cheering them through and watching some of the Green Race practice runs. At the take out, all of the participants gathered for some refreshments and a Shannon Christy Fund benefit raffle.

I do not think that I ever have had so much fun and seen so many smiles on the river. After years of usually being the only girl in a group, I am enjoying the explosion of female kayakers and the joy of boating with groups of women. I reconnected with a few friends that I have been missing and I made some new friends. I want to thank Laura Farrell for organizing this event and talking me into going.  Special thanks to the NOC, GIRLSATPLAY, Mountain Khakis, Asheville Adventure Rentals, and Dagger Kayaks for the raffle prizes and shuttle support.